X
This site uses cookies to provide and improve your shopping experience. If you want to benefit from this improved service, please opt-in.
More Info
Accept Cookies
Free Delivery to most parts of the UK on orders over £39.99
Same Day Shipping On Orders Placed Before 12pm
Free support from experts in our field 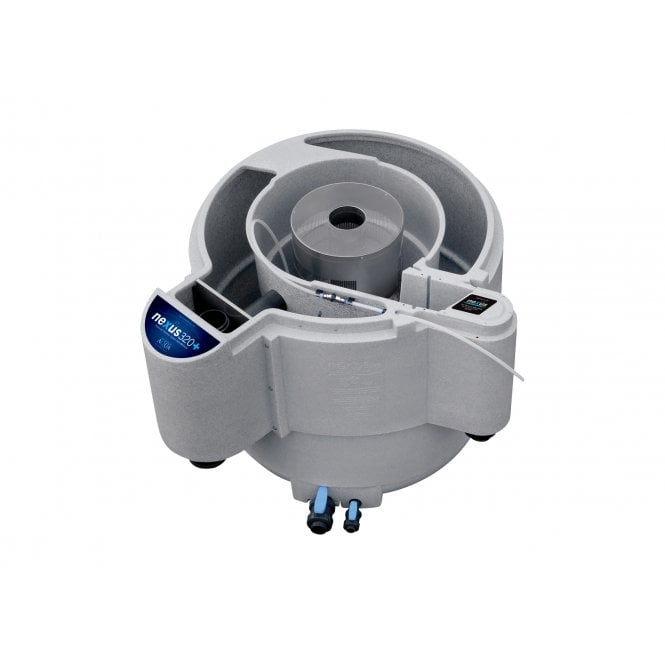 Evolution Aqua have consistently been innovators in the koi pond filtration market and this new generation of nexus filter is no exception. The new design Nexus 320 filter system now has a new and improved Removable 'EAZY' filter with a more efficient slot patten with new K1 micro filter media for improved mechanical filtration.

The Nexus 320 filter has been design for pump fed and gravity fed koi pond systems of up to 34,000 litres (7,500 gallons). This high capacity mechanical and biological  filtration system has a relatively small footprint considering the volume of water it can deal with.

How a Nexus Works

A Nexus is a simple yet innovative filtration system, water enters via the Nexus inlet and into the inner chamber which acts like a Vortex to settle out the larger solids.

After the mechanical filtration, water passes to the outer chamber of the Nexus where a moving bed of standard K1 media is waiting to perform the biological stage of filtration before returning to the pond through the exit gril.

The moving bed of K1 is very effective at breaking down the harmful ammonia and nitrites into less harmful nitrates.

The Eazy is the stainless steel cylinder located in the centre of the Nexus. It contains a set volume of K1 Micro, a plastic media. Water enters the Nexus in a downwards motion, allowing larger solids to settle to the bottom of the chamber before entering the Eazy. Water enters the Eazy at all angles and provides additional mechanical filtration with finer particles getting caught in the K1 Micro. Water then flows throught the central slots and into the outer chamber of the Nexus.

Thie outer chamber of the Nexus contains a moving bed of standard K1 plastic media. Extra K1 media can be added to increase filtration as your fish grow.

The outer chamber is where the final stage of biological treatment occurs. Biological breakdown occurs through different strains of bacteria living on the protected surface area on each piece of the K1 Media. These bacteria convert Ammonia and Nitrite into harmless Nitrate. The amount of Ammonia and Nitrite produced in the pond is dependent on feed rates and the type of food used. For higher feed rates additional K1 Media should be added into the outer chamber.

Easy To Clean And Maintain

A key feature of all Nexus filtration systems is the sheer ease of maintenance. This still remains the case with the new Nexus 220 and 320 systems. The Eazy is simply cleaned by using a combi- nation of the cleaning pipe, air valves and ball valves fitted to the Nexus, meaning you don’t need to get your hands dirty. The clear lid fitted to the Eazy also makes it easy to visual inspect the K1 Micro media.

An additional 200 litres of K1 media can be purchased for the Evolution Aqua Nexus 320 filter system to increase the capacity of water it can maintain up to its full 34,000 litre potential.

No air pump is supplied with this filter as the size required depends on the amount of K1 media that is used within the filter, see below for a guide to the air pump sizes

All extras are available to purchase from Discount Leisure Products. If you have any questions please feel free to contact us to discuss your requirements.

Code:
We aim to ship all orders received by 12 pm the same day with the exception of fibreglass fish ponds, Gardeco products & other special order products.
The 24 hr postage option does not include deliveries at weekends or bank holidays.
For full details please follow the link Delivery & Returns